Audi has always been a pioneer in the automobile industry. The now mythic “Vorsprung Durch Technik” (which in English translates to “advantage through technology”) definitely proves this. This philosophy brings forth incredible technological achievements, which is even truer when we consider the electrical Audi models. The E-Tron GT (first Sedan to rely entirely on electricity) and the 100% electric SUVs E-Tron and E-Tron Sportbak are true successes.

Riding the waves of these accomplishments in electro mobility, Audi develops two more models, the 2022 Audi Q4 E-Tron and the 2022 Q4 Sportback E-Tron. This dynamic duo of electric sport utility vehicles are arriving soon in Canada. We, at Audi Blainville –your Audi dealership for all of the Laurentians area-, are proud to share with you everything we know about them!

Interior design: bringing the future of Audi esthetics and style right to your door, at Audi Blainville!

Let’s begin by examining the exterior of these two Audi 100% electric SUVs. It will, after all, be the very first thing you’ll notice between the North Shore of Montreal and the Laurentians once they arrive in our dealership!

Both the 2022 Q4 E-Tron and the 2022 Q4 Sportback E-Tron offer a design that is in line with Audi’s purest traditions; but with a twist. It brings a slightly more futuristic approach than the other non-electric SUVs: geometric headlights, a single frame radiator grille with crenellated patterns, augmented ground clearance which enhances the incredibly well sculpted flanks and modernistic taillights. These two electric versions of the 2022 Q4 E-Tron are as athletic as they are elegant. They also demonstrate Audi’s confident and forward-thinking stance in regards to the future of style and design.

You will have the choice between these two silhouettes –“normal” SUV or coupe– for your future 2022 Q4 E-Tron. Whichever model you choose, you will definitely be turning heads around the Blainville and Laurentians area!

Spec sheet: unrivaled performance without a drop of gasoline!

One thing is certain: whether an Audi is electric or not, its power and unparalleled characteristics are undeniable. The 2022 Audi Q4 E-Tron and the 2022 Audi Q4 Sportback E-Tron are no exception to this rule. Even if they are available elsewhere in both rear-wheel and all-wheel drive versions, as well as with 52 kWh or 77 kWh battery options, only the high-end models (all-wheel drive and highest capacity battery) will be offered in Canada.

This variant is named the model “50”, according to number classifications put in place by Audi a while back. Contrary to the other two models (the 35 and 40 versions) which offer only rear-wheel drive and have one single electrical engine, the 2022 Q4 E-Tron 50 will have two. Its electric range will reach 488 km for the SUV version and 497 km for the Sportback version, according to WLTP European standards. Audi Canada also states that the Q4 E-Tron can recuperate up to 130 km of range in only ten minutes, when plugged to a quick charge electric station of 125 kW. It also offers a regenerating braking system that can recuperate up to 90% of the energy generated while breaking.

If we focus now on the 100% electric powertrain system, the numbers don’t disappoint, offering 295 horsepower and a maximum engine torque of 339 lb-ft. This allows for the 100% electric Audi Q4 E-Tron to reach 0-100 km/hr in no less than 6.2 seconds and for a towing capacity of up to 1200 kilos. As you can see, the 100% electric Audi Q4 Sportback SUV is not only a masterpiece of style and design, but a true athletic powerhouse as well. It is sure to knock your socks off in any whether, the minute it reaches our Audi dealership in Blainville!

We’ve saved the best for last: a look at the Audi Q4 E-Tron and 2022 Q4 Sportback E-Tron interiors! Keeping in harmony with the exterior, the interior design is also 100% aligned with Audi’s purest traditions while offering a futuristic twist as well. For this reason, they stand out from all of the non-electric models, elevating them to a class of their own.

The interior style brings comfort and luxury: a refined and understated dashboard, geometric designs –notably in the vents on either side of the driver’s seat-, no visible gear lever and a modern steering wheel flattened on the top and bottom. It also makes a powerful statement as to how Audi envisions the future of its stylistic stance, bringing it forth with both confidence and panache.

However tasteful and rich the interiors are, it is the cutting edge technology that is sure to charm you the most: an 11.6 inch multimedia central screen, a 100% digital dashboard replacing traditional analogue components, heads-up display with augmented reality, as well as an ultra-high performance audio system developed by Sonos. No matter which model you choose, the 2022 Audi Q4 E-Tron and the 2022 Audi Q4 Sportback E-Tron will provide you with the dreamiest and most fulfilling daily drives!

Do you have follow up questions? Do not hesitate to contact one of our specialists at Audi Blanville, your reference for everything Audi from the North shore of Montreal to the Laurentians! It will be our pleasure to assist you with anything we can as well as to inform you of Audi offers and lease/financing programs, which will allow you to take the wheel of your brand new 100% electric Q4 E-Tron as soon as it is available here. Looking forward to seeing you in our dealership! 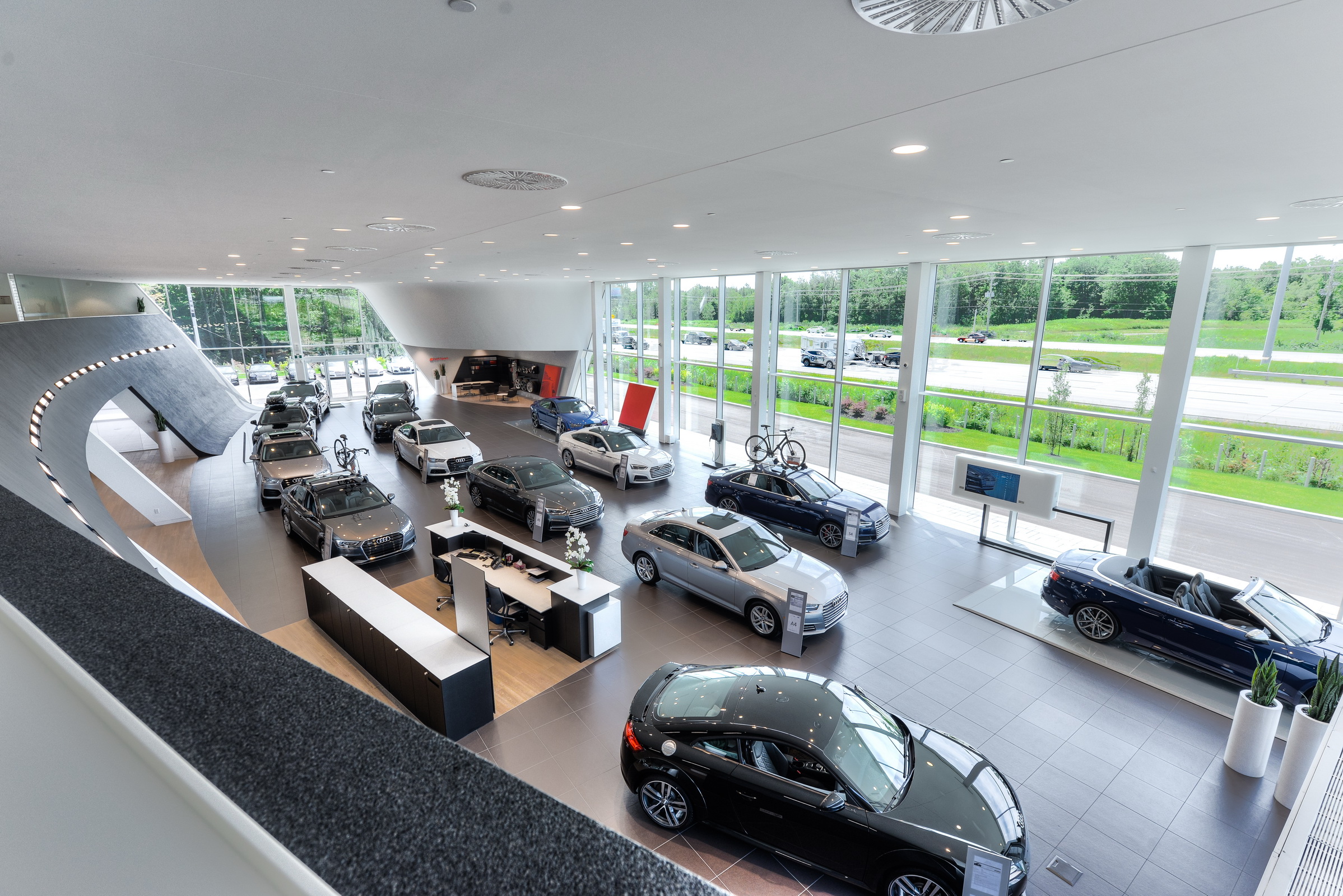